Please note: Covid-19 has created unprecedented uncertainty in global markets. While we have attempted to be accurate in the projections of market sizing, there remains a high level of uncertainty. The 2020 Market Intelligence Reports were published and printed in March, before lockdown. It is anticipated that global economic stimulus packages being developed to revitalise the global economy after the acute Covid-19 crisis, would be geared towards technologies of the future, including a strong emphasis on scaling greentech solutions. 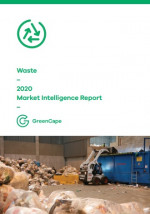 According to GreenCape’s recently published 2020 Waste Market Intelligence Report (MIR), opportunities within the organic, e-waste, plastics and builders’ rubble sectors have the potential to add between R661.3 and R1 086.4 million in value to the Western Cape economy per year.

“The South African waste economy continues to see a growing interest in the uptake of alternative waste treatment solutions and associated value chains,” said Sam Smout, GreenCape’s Waste sector desk. “This has resulted in continued and increasing diversion of waste from landfill, both within the Western Cape and so some extent the rest of South Africa. This is likely to accelerate in the next three to five years, as a circular economy mind set becomes more embedded in our production and consumption patterns; as well as, in national policy and planning,” he added.

The following investment opportunities have been highlighted in the Waste sector of the Western Cape for 2020, with the City of Cape Town Metropolitan making up a substantial proportion of the opportunities.

The Western Cape generates ~1.7 million tonnes of builders’ rubble. The market value is estimated at ~R48 million per year.

GreenCape’s sector desks are in the unique position to gather current insights from businesses active in the green economy, as well as from other key role-players in each of the sectors. The MIRs are focused on highlighting opportunities in the Western Cape, and they also include relevant national insights and context.